Phages belong to the simplest and most primitive form of life (viruses). They are extraordinarily specific for the bacterial host that they infect to propagate. They can rapidly infect their host and insert its genetic material into their host. As a result, they produce large numbers of copies that can further infect (and in some specific cases decimate) the bacteria causing the infection. They can also make the bacteria vulnerable to classic treatment by altering their genetic material. Most importantly, bacteriophages can have a killing capacity. Phages are so small that they can penetrate and eventually disrupt bacterial biofilms. Such biofilms are a major barrier employed by bacteria against antibiotics and hence an important contributor to antibiotic resistance. Phages ability to penetrate biofilms allows them to propagate to high levels in the localized centers of bacterial infection and to destroy the bacteria within them, to produce strong, but highly localized, therapeutic effect.

Bacteriophages are ubiquitous and are part of the natural ‘ecosystem’ of the bacteria living and replication cycles. We have decided to focus on bacteriophages as a target for direct detection of an infection, as they are specific and outnumber the pathogen bacterial population. 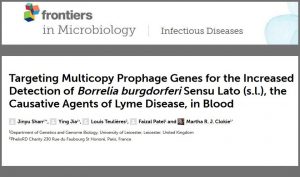 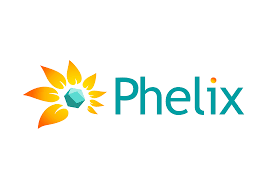 See the Press Release from Phelix

Why to use bacteriophages as a diagnostic tool?

Tick-borne infections are increasing globally – Lyme disease is among the most prevalent vector borne infection in the U.S. and Europe and is reaching epidemic levels (Kugeler et al. 2015; Sykes et al. 2014). While most ticks have the capacity to transmit a number of pathogens that cause human disease, Lyme disease is the most widely known tick- borne disease and is caused by bacteria of the genus Borrelia; typically Borrelia burgdorferi which are gram-negative spirochete bacteria. Borrelia are divided into “genospecies”; among the most common include B. burgdorferi sensu stricto, B. garinii, B. afzelii, B. spielmanii, B. bavariensis and the newly identified B. miyamotoi. The overall high failure rate of tick-borne infection (TBI)-related testing underscores the necessity for novel approaches, i.e. not relying on serology and two-tier testing.

PCR-based assays are being used more often in clinical settings, and they have several distinct advantages over serology. They detect the presence of infectious agents directly. Unlike serology, they don’t rely on the development of antibodies, which can take several weeks, and not all patients are able to develop them at all. Nevertheless, PCR testing has limitations as well: DNA testing does not distinguish between living and dead organisms. The concept is that we are no longer looking for the bacteria but for its obligatory bacteriophage, which seeks to find the bacteria to survive. The genetic material of the bacteriophage is specific to the bacteria with which it is associated. This means that the different species of bacteria will have different bacteriophages.

Bacteriophages are present only on active bacterial infections; hence a phage-based test is a direct proof of an active infection. The current bottleneck in PCRs detecting of Borrelia is their low sensitivity. We have developed a direct and specific method which is more sensitive. Our detection method (Patented by Phelix R&D and Leicester University, WO2018083491A1) consists of targeting the presence of outnumbered prophages part of the bacteria lysogenic cycle. More precisely, one way to increase the sensitivity of a PCR assay is to increase the number of PCR targets. In contrast with the current PCR methods in Lyme diagnosis amplifying bacterial genomic DNA regions that have only one copy in each bacterium (such as bacterial 16S rRNA gene, RecA gene, and 5S-23S intergenic region), we propose a more sensitive, phage-based PCR assay for detecting Lyme Disease and Relapsing Fever caused by Borrelia burgdorferi sensu lato. To do this, we target a phage DNA sequence specific to all Borrelia species: Lyme Disease and Relapsing Fever. Our current phage-based projects are now focusing on a series of other bacteria known to be involved in chronic bacterial infections such as Rickettsia, Bartonella, Sutterella and Mycoplasma. Bacteriophages could become a diagnostic tool based on the principle that if there are phages it is because there are living bacteria. Phages are in the bloodstream looking for bacteria desperately, because if they don’t find them, they will die. And they are much more numerous than bacteria (there are 10 up to 100 bacteriophages per bacterium).

This approach offer an increased sensitivity due to the fact that there is much more circulating phages compared to bacteria, therefore it’s accurate and more sensitive than conventional PCR tests that are frequently negative due to low bacterial concentration in the blood. It’s also a DIRECT test, evidencing bacterial own genetic material in the body, in contrast to all existing indirect tests ( ELISA, Western BLOT, LTT/ELISPOT test). Secondly, it makes it possible to differentiate between the different subtypes of bacteria (B. burgdorferi s.l., B. miyamotoi, …), as well as the relapsing fevers. Finally, this test is also the very best choice for the early detection (remember that antibodies need several weeks to show up….).

What is Phelix Phage Test?

Phelix Phage test (patent n° WO2018083491A1) is performed on whole blood, but can be also used for any other material suspected to contain given pathogen (like biopsy, punction liquid from a swollen joint, cerebrospinal fluid or ticks). The very first step is to extract DNA using a specific manual method to ensure the very best recovery of pathogen DNA. The extracted DNA undergoes qPCR using patented primers and probes for a specific phage detection. Amplified fragments are further analyzed by sequencing in order to confirm the positivity of the sample (i.e. to rule out false positive samples). This technique is now applied for the very first time for Borrelia detection (B. burgdorferi s.l. and optionally B. miyamotoi, B. hermsii, B. duttonii, etc). This technique is now tested for other tick- borne diseases (Bartonella, Rickettsia, etc). In order to further improve the assay, we are now testing the same procedure on urine samples. In line with this, all patients are receiving, in the testing kit, 2 EDTA tubes for the whole blood along with one container for the first morning urine. We aim to compare the test sensitivity between blood and urine and if this trial is conclusive it will enable a testing on urine and will thus bypass invasive blood draw, enabling easier testing for all patients and especially children. The test price comprises and supports this ongoing research and development.

It is important to analyze the test result within the clinical context of the tested person. PCR Phage test result is reported as positive or negative. In some situation, it can be reported also as “borderline”; this means that only small DNA fragments were found (as a consequence of increased apoptosis, resolving infection, etc). A positive result means that at the time of the test, the patient had Borrelia present in its body. Positive result in absence of symptoms suggests that, despite the presence of bacteria, the immune system seems to control the situation. In the case of a positive test after a recent or previous serological diagnosis, it is important to discuss about the possibility of a late stage/ post-lyme syndrome or chronic form of borreliosis. A negative result means that at the time of the test and in a given sample, the presence of Borrelia was not evidenced. It is important to remember that in late stages the number of bacteria is very low and mostly hidden in tissues; accordingly the number of circulating phages will be low also. It is advisable to get retested at the period when the worsening of symptoms is noticed. Remember that ticks are carrying and transmitting many other pathogens (Bartonella, Rickettsia, Anaplasma, etc) that all give very similar symptoms. Thus a negative Borrelia test with persistent symptoms might suggest the presence of other pathogens. Finally, it is also important to remember that in late stages the symptoms are reflecting profound immune and gastrointestinal dysregulations as a consequence of previously untreated vector-borne disease(s). Chronic inflammation and low grade infections are the resulting complications of uncovered vector-borne diseases and thus need to be addressed in addition to testing for a presence of a specific pathogen.